Having read now how many differnt types of CCKW's there were, you probably think that all these types had at least their girlles (brush guards) in common. Sorry, even that's not true because there were considerable differences. The brush guard of a CC(K)W consists of twelve vertical bars. The top and the bottom of each bar have a small one-sided handle which is welded onto a horizontal frame. The handles were directed to the outer sides in case of the first 60,000 CCKW's: six to the right and six 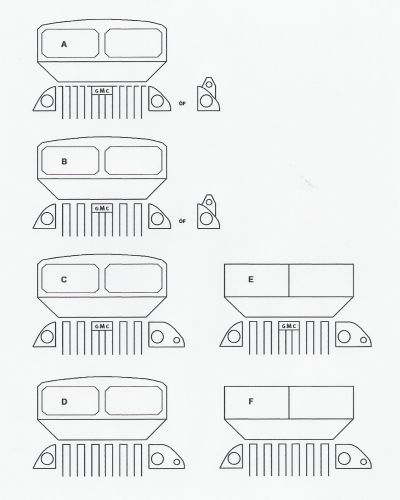 to the left (Figure A). From the spring of 1942, however, the handles were pair-wise directed to each other (Figures B-F). This change coincided more or less with the transition from a screwed, cast logo plaquette on the brush guard to a welded, pressed plaquette. The plaquette carried the letters GMC in elegant script..

From February 1943 the brush guard got an asymetrical shape when the grid protecting the left headlight was elongated to provide protection to the added black-out (B.O.) light (Figure C-F). The B.O. light had been developed in July 1942 and provided drivers with a narrow strip of light on the road ahead of the truck whilst remaining fairly obscure for aircrafts. Some of the earlier CCKW's received the B.O. light as yet in an additional frame on the symetrical brush guard (Figure A and B).

Around the time of the transfer from closed cabs to open cabs (April-May 1943), a US court ordered that brand names should no longer be visible on military vehicles. The brush guard hence lost its beautiful plaquette. The change of the cab type more or less coincided with the disappearance (removal?) of the plaquette. So,  closed cabs without plaquettes and open cabs with them are relatively rare. Original photographs indicate that both combinations (Figure C-F) have indeed existed. The combination of an open cab and a plaquette is the rarest of the two with approximately 10,000. The table below summarizes the matter

This survey is based on various papers and books. It is difficult, however, to draw final conclusions because references often contradict each other. Anyhow, some combinations of brush guard types, bar handle directions, cab types and logo plaquette are historically unlikely. Why then, any thinkable combination can be observed nowadays? One of the major reasons could be that in the post-war period truck parts have been swopped to one's hearts. In one respect the vast majority of today's brush guards is historically incorrect: the shortening of the third bar from the right is a post-war NATO modification to make it easier to drain the cooling system.

Mysterious logo plate? CCKW either has no logo or a rectangular one. That is what every connaisseur will tell you. Wil Hoyer and I have so far found two pictures of army CCKW tippers with closed (!) cabs bearing an oval logo plate. American expers assure us that these must have been made at home by people regretting to miss an official logo. Who gives the definitive anser?

Bact to the top of this page